The durga puja of Mallick family started since the time of Nawab Hussein Shah of Bengal nearly around 15th century AD. Every year the Mallicks worship the goddess in the ekchala pattern. The artisan Nobo Pal of Kumartuli has been making the idols for them since long time There are two different locations in Mallick bari where the durga puja’s rituals are performed . They are ‘Durga dalan’ and ‘Annapurna dalan’. The festivity of the durga puja, apart from uniting the family, gives them a reason to look forward to the next year that promises re-unions and family bonding. 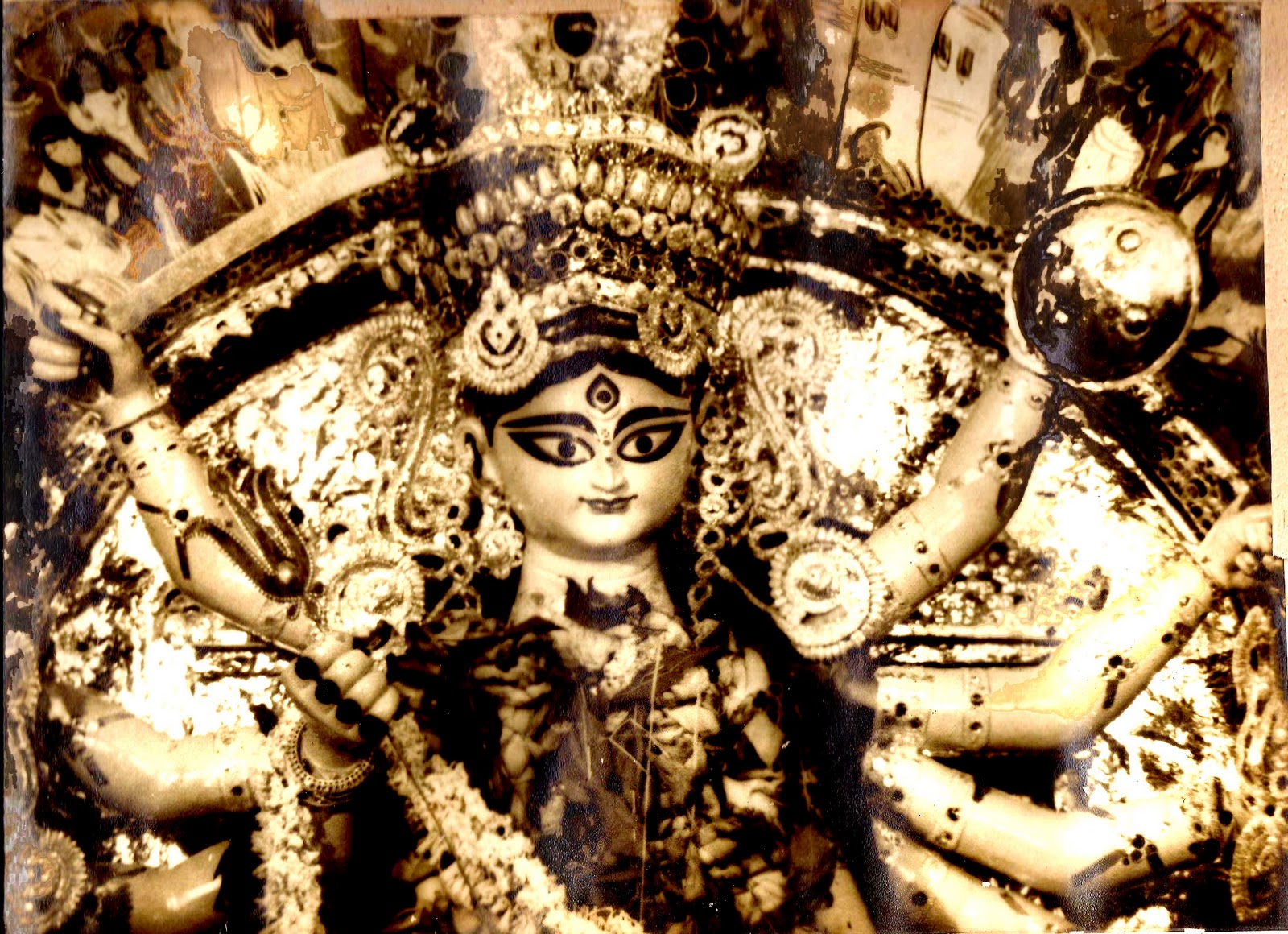 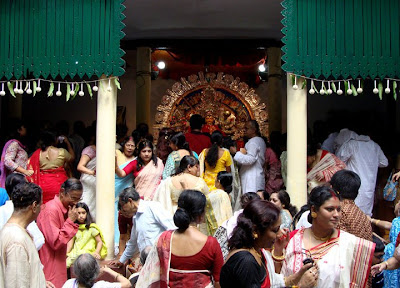 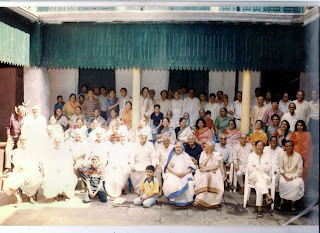 Being Vaishnavas, the mallicks take purely vegetarian food during the puja days. But on Dashami, when the idol is taken to the Ganga for immersion Mallicks turn to Non-veg. They do not perform the ritual of sacrificing animals .The cuisine does not include any preparations made with rice .The delicious Bhog and other mouth watering dishes like Luchi, Chhanar dalna, Alu fulkopir tarkari are being prepared in Mallick bari’s kichen by the cook. The women of the family supervise the whole process with huge enthusiasm. 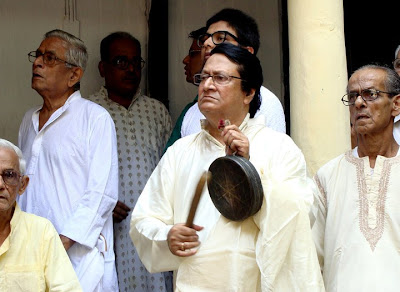 Eminent member of the Mallick family and bright star of the tinsel town Ranjit Mallick is very proud of their family tradition. He shared with durgapujaonline.com, “From childhood durgapuja is our life. We have a joint family and me and my cousins used to enjoy a lot during durga puja. On Janmashtami kumor starts making the idol in our dalan, from Mahalaya onwards we hear the chants of chandi. We have the tradition of ekchala and dhaker saaj. I don’t take any shooting assignments and I expect my daughter to follow this as well.” 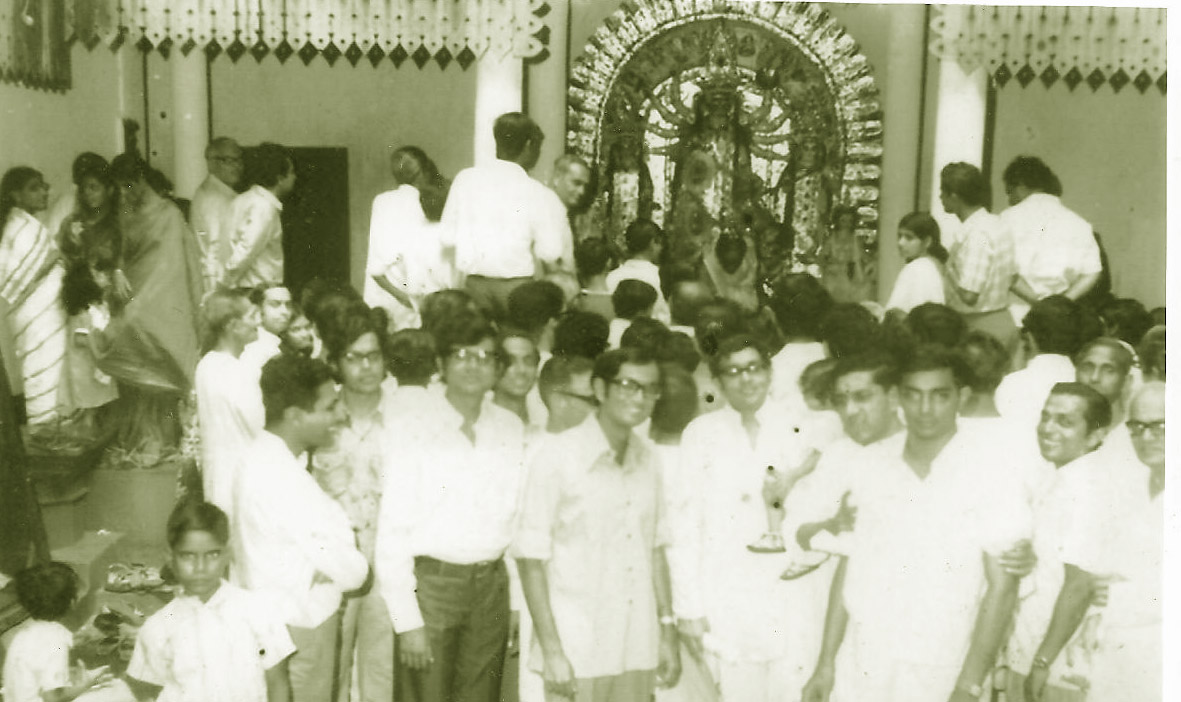 An apple of everyone’s eye in Mullick bari and the most popular actress of Tollywood Koel Mullick said, “For us, durga puja is not all about the great family reunion, but also a fascinating moment of rejoicement and I don’t want to miss out these moments, so I do never schedule any shooting during durgapuja moment. Since we are a conservative family, women do not dance in public. My father, uncles and brothers dance while we cheer them with vigor and zeal. On the day of immersion we all take elder’s blessing in the form of ‘astadurba’ (eight varieties of grass).”

The Mallick family members feel a sense of inherent strength and self assurance that Durga maa has bestowed part of her radiance into them. 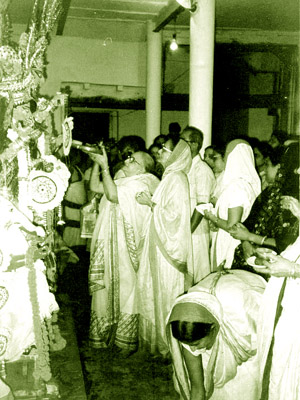 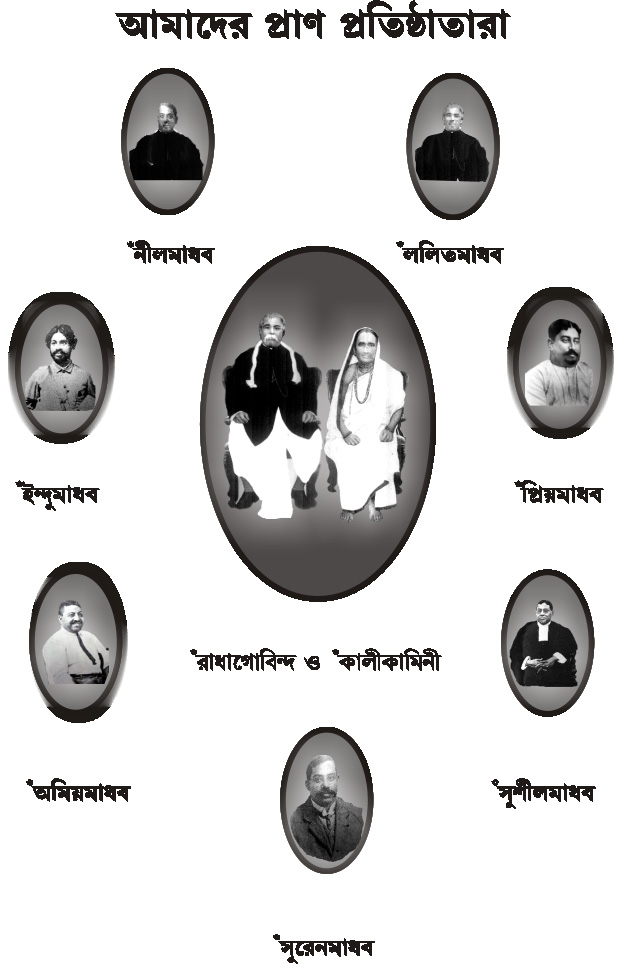 Late RADHAGOBINDA MALLICK settled in Bhawanipur in the year 1860. The original village was in SRIKHANDA, Burdhawan Distt from where a branch left for GUPTIPARA. He had seven sons NEEL MADHAB, LALIT MADHAB, INDU MADHAB, AMEO MADHAB, PRIYO MADHAB, SUSHIL MADHAB and SURAN MADHAB and he established the “MALLICKBARI of BHAWANIPUR”.

The Durga puja used to be held in the native village but later on from 1925 the puja also started in Kolkata. This puja started off with great grandeur, with packed program till Lakshmi puja. During those early days JATRAS, KIRTAN and variety programs were being held. The members of the joint family consisting of 2/3hundred members along with their near relations used to participate. The male members used to take part in the program staged, while the female members used to arrange all the puja necessities. The male members impersonated as female characters as per custom of those days. For the children, puja were the days of happiness in the company of Devi Mother. Later on the Jatras were transformed to drama and Kirtan to Rabindrasangeet, D.L.Roy, Atulprasad, Rajanikanta and also modern songs.Earlier female characters were done by the family members themselves. The Idol preparation starts at our Puja Dalan from JANMASTHUMI day.

Though the family deity is SRIDHAR, Lord VISHNU, yet n the Mother goddess in her various forms are being worshiped throughout the year in the form of ANNAPURNA, KALI and so on. The Mallick’s also perform LAKSHMI, GANESH, SARASWATI, KARTIK and various other pujas held round the year. Though the puja has lost much of its old glamour these days due to the rat race, tight schedule in people’s life and decentralization from the main Bhowanipore house, yet the Mallick’s try to keep the front, with the whole family having food together and performing various programs during these days. Many of the family members are now staying in different parts of the country and abroad, but these members try their best to come to the family during the puja days and enjoy ADDA for hours together.

On the Bijoya afternoon in the SINDOORKHELA rituals, always the senior most housewife does the BORON and then all the ladies get together for SINDOORKHELA. Then just before the sunset the Mallicks start for BISHARJAN with many DHAKIS. The Goddess is carried on the shoulders of 24 coolies on 3 bamboos and most of the family members walk along with their Divine Mother to the Balaram Bose Ghat at ADI GANGES off Harish Mukherjee Road.

After the BISHARJAN, the members along with other relations assemble at the PUJA DALAN for the holy water SANTIJOL and start greeting each other for BIJOYA. Then after dining together in the age-old set mence of Mallickbari family members participate with all the good old songs from NADERNEMAI, D.L.ROY, RABINDRASANGEET, ATUL PRASAD, RAJANIKANTA, and so on till midnight. What always remains with the Mallick’s is the spirit of togetherness, the spirit of Pujo.

The idol is worshipped in “Ekchala” form. There are two different locations in Mallick bari where the puja rituals are performed. They are “Annapurna Dalan” and the other “Durga Dalan”. Mallicks are basically “Vaishnavas” and practice no rituals of animal or vegetable sacrifice. 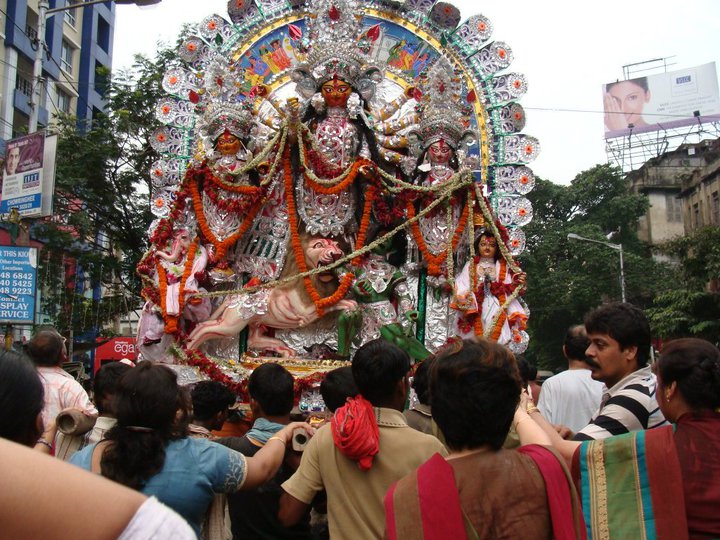 Over the years it has been one long tradition for the patuas of Bhowanipur to make the Durga idol for the Mallicks. The family takes vegetarian food from Sasthi to Nabami and its only after the immersion of the idol on Dashami they prepare non-veg food. They do not offer rice offerings to the goddess, instead preparations of wheat are offered. After immersion, according to custom of the house, the eldest family member serve “Siddhi” to the rest of the family and bless them with “Astadurba” or eight varieties of grasses. 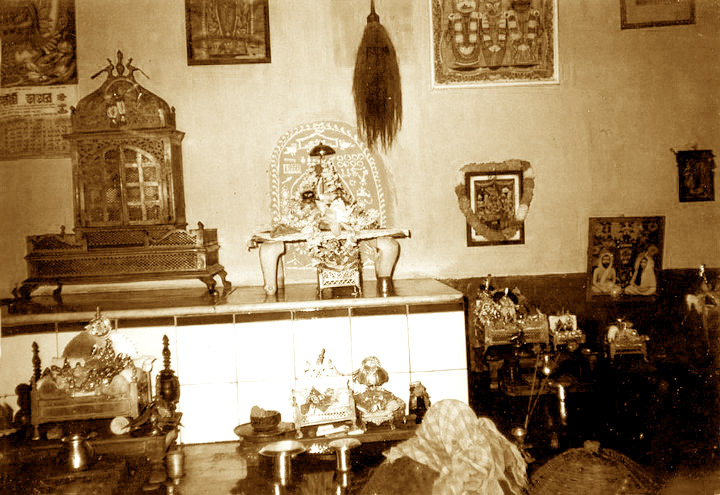 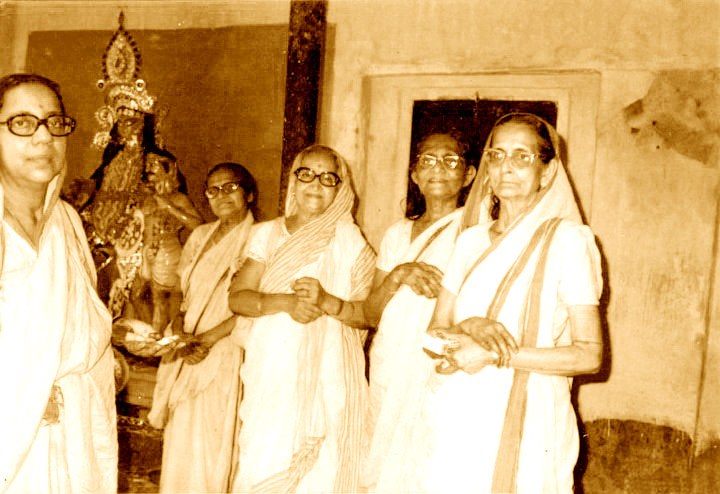 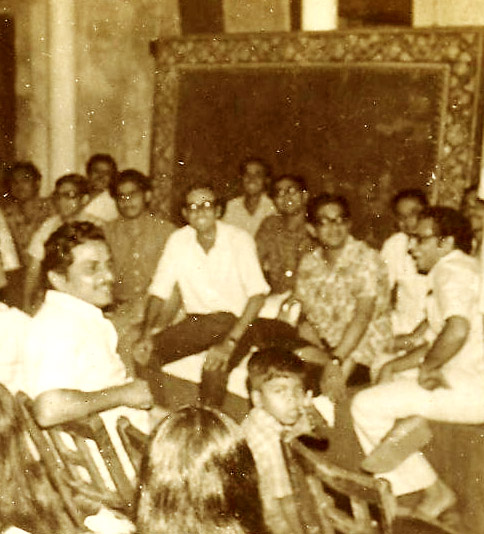 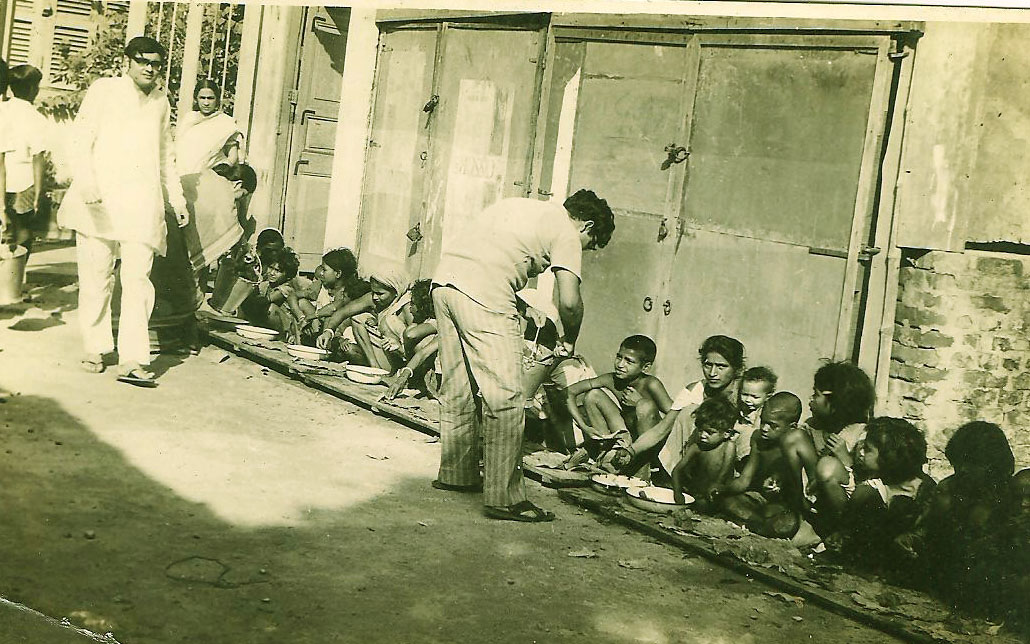 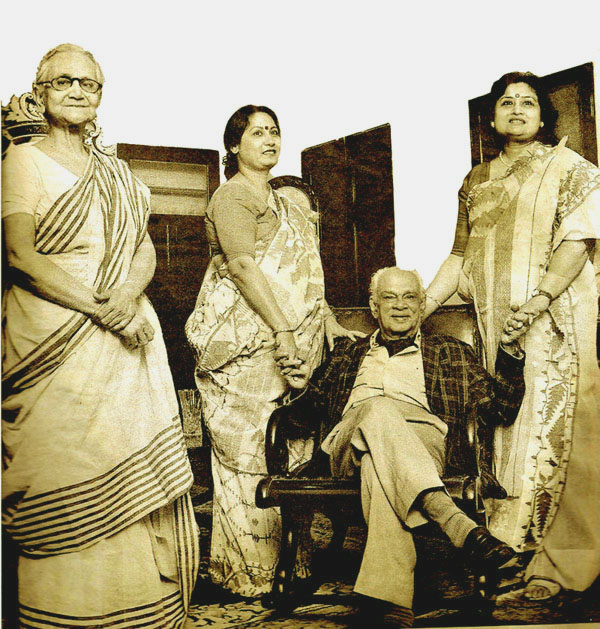 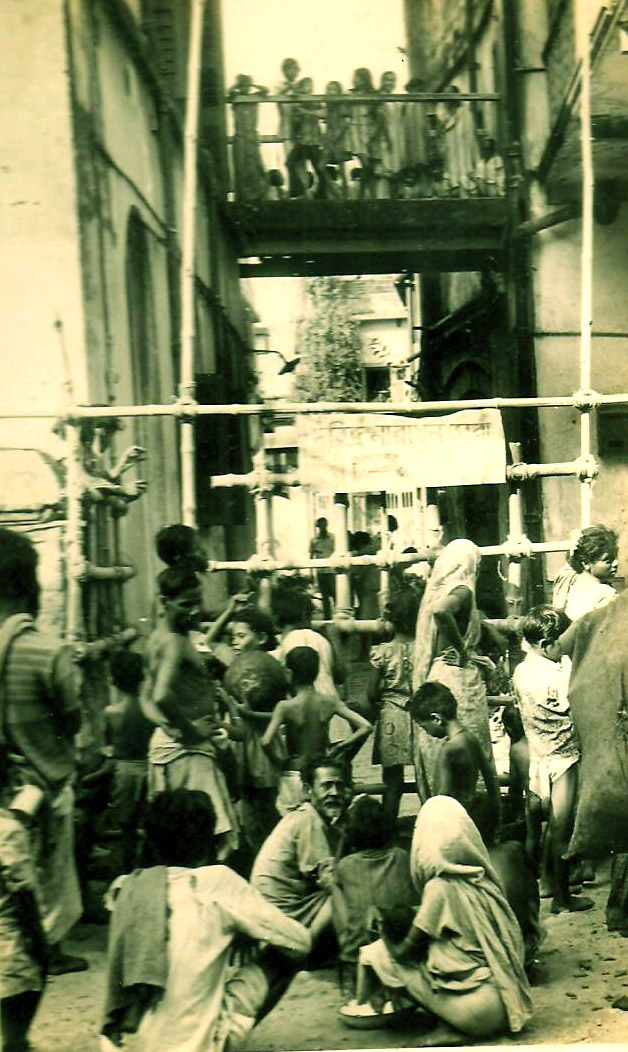