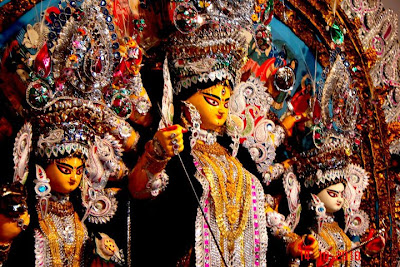 The festival relating to Durga Puja at Kolkata appears to be a remarkable tradition. Durga puja as used to commemorate by the aristocrat families and Zamindars of ancient Calcutta relates the history and foundation Kolkata. Daw family of Jorasako has been observing several festivals round the year. Of them , the reverence of Durga maa is being celebrated with enormous pomp and grandeur . The observance of Durga Puja by Daw family under adhering strict religious sanctity. 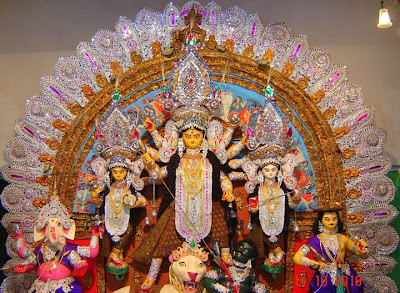 The present member of Daw family unwrapped some truth , which is thrilling, customary  and intuitional . During 16th century, the Daw of Satgachhia embraced Vaishnaba and they were basically “Pancho upasak”(Worshipper of five deities). During that day also , Durga puja was observed by the Daw family. The Durga puja of Daw family of Satgachhia is very much ancient. How far is it archaic , no indication is available.Late. Gokul Chandra Daw built his empire on the bank of Behula river at Satgachhia. In a short span of time , he earned wealth, fame and respect. He had no successor for heirship as he was without issue. Then he decided to come Calcutta and started residing at Jorasako. One fine morning he decided to adopt a four years  child Shibkrishna Dutta, son of his relative, Shri. Haradhar Dutta. Through an auspicious occasion Shibkrishna Dutta had become Shibkrishna Daw. It was in 1840. After adopting Shibkrishna , Gokul Chandra Daw celebrated Durga puja for the first time in Calcutta with deep religious sanctity and purity of rites.Shibkrishna Daw continued the tradition. He was not at all good looking, but in mind, he was free from all malevolence . The then famous writer of Jorasako, Shri Kaliprasanna Singho, manifoldly criticized Shibkrishna in his book, “HUTUM PECHAR NAKSHA”. That criticism did never let him down. He remained steady and focused on his desired goal. He was the first one, who excavated coal mine , which is now famous as “Shibpur Coalliary “. His contribution to construct rail line ia never be denied.He proved that famous men had remained immortal in the heart of the people. That lane was dedicated to him, naming Shikrishna Daw Lane. 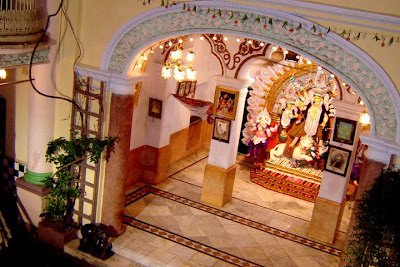 171 years old tradition has been carrying by the new generation with same devotion and commitment. The commencement of Durga puja schedules on the day of Ratha Yatra, when “Kathamo Pujo” is celebrated . A piece of Garan wood is being brought from Sundarban region. Then after the artisan start making idol of Maa Durga.  On the auspicious day of “Janmastami” the head of Maa Durga is  being attached with the body. The height of the idol is 12 feet and width is 10 feet . The time goes by…….The gentle touch of colorful brush creates the devotional mood of Durga puja. In Daw family , Durga is yellowish, black Asura, Milky white Saraswati and the laxmi is being articulated with greenish  touch .

Shri. Ashim Kumar Daw, the sixth generation of Daw family intimated “Shri Shibkrishna Daw brought ‘Tabok’from Germany to decorate the ‘Chalchitra’. I heard from my mother that Shri. Shibkrishna Daw  also brought Diamond and Emerald Jewelries  from Germany and Paris for adorning Devi Maa”. Shri. Ashim Babu also cherished, “Maa Durga was being ornamented with the ‘Daaker Saaj’ and bejeweled with ‘Shola’(cork) and finally decked with the weapons, made of brass”. “In the bygone time , the artist used to come from ‘Opaar Bangla’(Present day Bangladesh) to craft the cork jewelries.”Ashim babu added.
This year the artisan of Kumartuli Shri. Swapan Pal will articulate the idols maintaining the old age traditions of Daw Family. From Shashthi onward the door of ‘Thakurdalaan’ is opened for the mass. The city of Kolkata almost never sleeps during these days, irrespective of caste, creed and religion, people are cordially welcomed in the courtyard of Daw family , giving a rise to the universal brotherhood.

As usual, ‘Bodhon’ will be scheduled on the day of ‘Protipad’. After welcoming Maa Durga by the ladies of Daw Family, the image is guarded by making ‘Teerkaathi’. The then ‘Samkalpa’ takes place. On Saptami dawn , the male members of Daw family walk off to the bank of the Ganga to get “Nabapatrika” to be bathed with 9 types of water. They are , water of seven oceans, Rain water, Coconut water, Mingled water of ‘Pancharatna’, Padmarenu. Saraswati water, Water of fountain, water of ‘Sarba tirtha’ and finally Shuddha Jal. After that “Nabapatrika  is being set up.The daw family has yet stick to the essence of sanctity. In term of tradition , the daws never compromise. Worshipping of Maa Durga goes on……The ‘Arati’, ‘Bhog Arati’, ‘Sandhya Arati are taken place as per agenda. The enchanting hymns , beats of Dhak, smoke of ‘Dhonuchi’ and the aroma ofincense create a devotional mood in the entire courtyard of Daw Family. If you peep in the “Antarmahal” , you will find ladies, extremely busy in their household work. During these festive days they don’t get time to roam around the city of Joy for hopping pandal to pandal. In Daw family, the person , who does the ‘Samkalpa’, performs the ritual of ‘Dhuno Porano’. This is the way , how the person prays for the peace and prosperity of the family. It is the glorious moment to watch. Then the preparation of “Sandhi pujo” evokes……The male members arrange ‘Noibeddyo” which is to be offered to Durga maa. The “Noibeddyo”is bing prepared with 1 monn (40 Kgs.) Rice which is decorated with 45 small pots consist of variety of items. 108 pradips are lit up . It seems a terrific moment when the “Sandhikshan” arrives…..As because they are Vaishnabas, no rituals of sacrifice is taken place. With the hymns of choras “Jai maa” the august “Sandhikshan” commences. The ‘Bhog’ of “Sandhi pujo” is given to ‘Gurudev’ of Daw family. “kumara Puja” is observed on Nabami.

Shri. Ashim Kr. Daw intimated, “In the olden time, a musical concert had been organized, where the eminent personalities , like, Sachin Das motilal, Asitbaran  participated. But those days has gone”. The is scheduled on Dashami. The image of maa durga is unanimously removed from Thakurdalan to the widen courtyard of Daw premises, where the Alpana is being designed by the ladies . From Shashthi to Nabani, the Daws take vegetable dishes. But they take “Maachh Bhat”(Fish meal) before welcoming Durga maa. Then Married women apply vermilion by gracing and greeting each other with sweets. The tumultuous hue and cry evolves all around . It is a colorful moment when the roar of laughter and silent tear are melted with each other.

Shri. Ashim Kr. Daw cherished, “ We have been trying our level best to uphold all the rituals of performing puja, but some changes have been occurred due to some social problems. Previously Maa Durga was being carried on the shoulders of 40 Orriya Bahok ( Carrier) ,but we give up the process just because of the scarcity of Bahok. Another glory has been faded out, once we used to free, three Neelkantha birds, first one ,when maa was carried out of the home, Secone one, when maa was being shouldered towards the Ganga, and the final one , when image of Durga had been immersed”.

There are so many chitchats evolves with the name and fame of Jorasako “Daw family” . In ancient time , a few traditional Durga puja had been celebrated with solemnity and opulence . But in Jorasako area three families were in limelight. Even today, people whisper “Maa comes in ”Daw house” to wear jewelries, takes her lunch at “Mitra Bari” and finally goes to “Shovabajar Rajbari” to enjoy music. Now , the time has changed. The hymns of Stotras have been faded  out with the cracking jhankaar beats . Most of the people cried out for theme thriller rather than the traditional pujos. It is true…but partial, my dear friends. If you have a desire of observing  traditional pujo garnished with deep devotion, then don’t miss the pujo of “Daw Bari, Jorasako”.  You will feel the actual flavor of traditionalism. 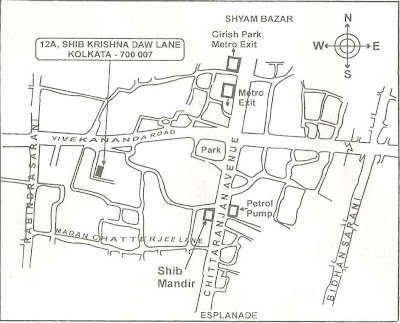