Durga Pujo taking place at the Royal Households have always fascinated us, Durga Puja have been occurring for so many years, might have been started by a forefather, numerous rituals yet so strikingly different, these Durga Pujos have a different attractiveness and charisma. It has an aura encircling it, the history of these Pujos, our inquisitiveness to unearth informations about them, certain mysteries, some stories are passed down to the coming generations, some myths, some facts  might be shrouded under darkness while some others are referred to time and again, Durga Pujos in the Royal households is really a extensive topic that requires research and study but its not humanly possible to assemble all those information from every nook and corner. The history and ritual details of Durga Pujos in Royal Households.  We would now acquaint you all with some knowledge  regarding Ghosh Family residing at Dutta Bari
Location / Addressee of Dutta Bari Balaram De Street
‘” Dutta Bari“
159, Balaram De Street
Kolkata – 700006.
( Land Mark : Girish Park Metro Station). 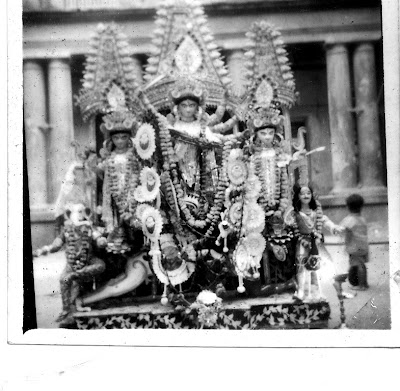 1882
Their  Forefather Shri Shyamal Dhon Dutta ( Solicitor High Court) who hails from Hath Khola Dutta Bari inaugurated this puja in the year 1882 and till date the 6th descendant of the family is commendably carrying the tradition forward. 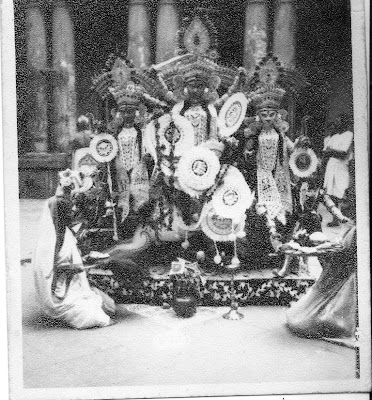 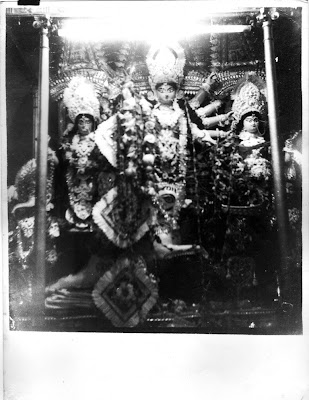 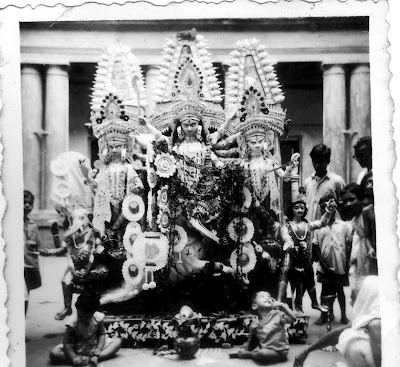 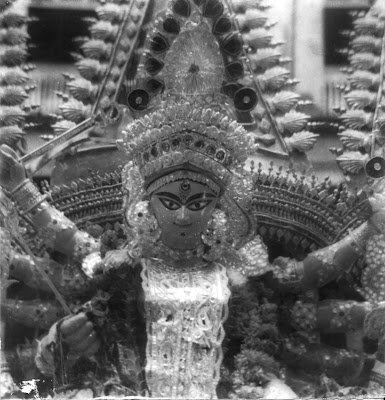 The Pratima of Ma Durga  is made on the Katahamo which is divided into three parts. The kathamo pujo is done on the day of Ulto rath.The chalchitra is divided into three parts. On the upper right side of the chalchitra is the painted image of Radha Krishna while at the bottom is the image of Chandi of ‘Nishumbha’ war. On the upper left side of the chalchitra is the picture of Ram and Sita while at its bottom is Chandi in her ‘Shumbho’ form. At the top middle of the chalchitra is the image of Kali and at the bottom is the painted image of 10 avtars of Vishnu. On the curved frame work of the ‘Chalchitra’ are 2 parrots.Towards the idol of Lakshmi on the chachitra is the image of Shiva on an ox while towards the idol of Saraswati is Ram and Hanuman. Durga’s appurtenance, the Lion has a horse face. The entire dress of the pratima is made of clay. The ornaments of Ma Durga, her bangles, her neck piece are carved out of clay  and are also hand- made.  The weapons of the partima is of pure silver which is changed on dashami.

The Chandipath starts on the holy day of Mahalaya and continues for seven days with 7 brahmins doing the regular rituals. On the Mahashasti the Ma Durga  is welcomed home at the auspicious moment of  Bodhon . On Mahasaptami the puja starts with the kala bou snan at the ganga. 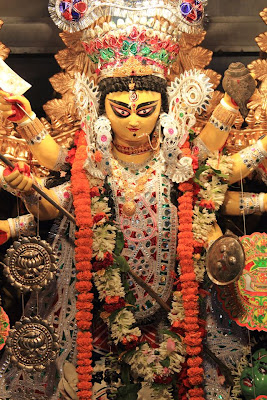 On Maha asthami   the ritual of dhuno porano is performed  where the married ladies of the family hold the burning malshas in their hand. At the time of Sandhi Puja the 108 maha pradeep is lightened by all the family members.The sadhaba pujo and the Kumari Puja is held on all the three days ( Saptami Asthami and nabami). 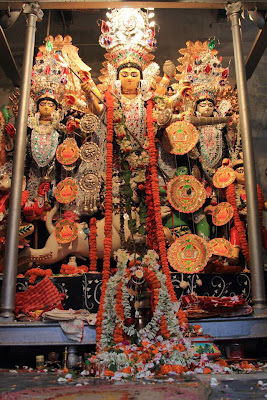 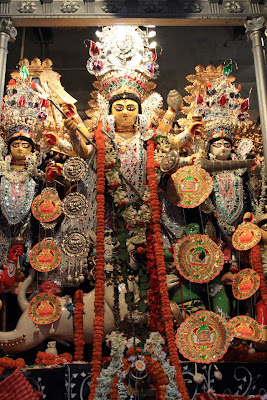 The Maha bhog of the Pujo consists of Radhaballabi, Ledikeni, Dorbesh, Narkel Naru, Doi, Khasta Kachuri and luchi. The Bhog is prepared by organizing ”vien” at the household. This custom is followed from 1882 and for a period of almost hundred and  thirty years  the Bhog tradition is maintained where twice in a day it is prepared entirely at home with utmost devotion. 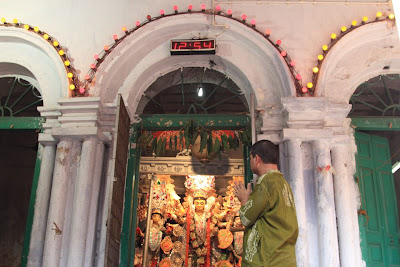 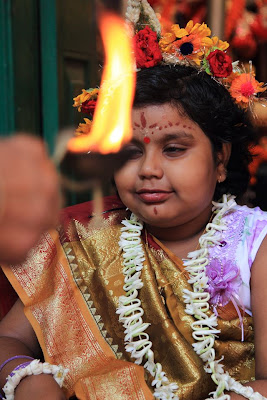 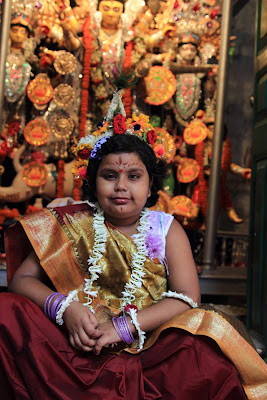 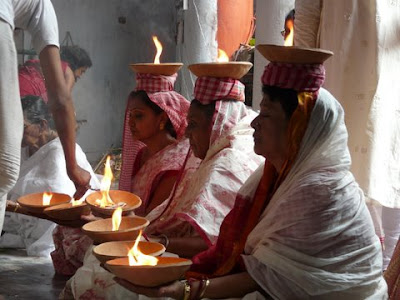 On Dashami the Daridra Narayan seva happens where Kichuri bhog is distributed.

At the time of dusk the immersion of the pratima is done . The  speciality is that the Pratima is taken to the ganga on human shoulders , eighteen manual labourers with the support of three bamboos  join Ma Durga’s grand farewell procession. No vehicle or any kind of mode of transportation is strictly prohibited.   The chachitra is being attached to three bamboos which is a tradition to the family.

The well- known  ‘Nilkontho’ ritual is also a part of this family’s tradition  where one of the birds are set free on the day of immersion while the other one is let out after the immersion. Due to government restriction now only a clay form of nilkonto is immersed along with the idol. Another feature in connection with immersion of Ma Durga is that of Jora Nouka, Ma Durga is taken to almost at the center of river Ganga, the two boats are moved apart and the idol is submerged into the river.