Kali Puja (কালীপূজা), also known as Shyama Puja (শ্যামাপূজা) or Mahanisha Puja, is a festival dedicated to the Hindu goddess Kali, celebrated on the new moon day of the Hindu month Kartik especially in Bengal, Odisha, Bihar and Assam.

Goddess Kali is regarded as the most fierce and destructive form of Shakti. She has a dark complexion, red eyes and has four arms. In one of Her hands She carries a sword (khadaga) and in another hand She carries the decapitated head of a demon. The other two hands are in the position of blessing Her devotees. She also wears a garland of heads of the demons She has killed which makes this form of the Goddess even more fearful and divine. Apart from all Her fierce looks, You will also see that the tongue of the Goddess is always out. The most important part is that the Goddess is shown as stepping over the chest of Lord Shiva, who is Her husband. This episode of Goddess Kali stepping over Lord Shiva has an interesting story behind it. 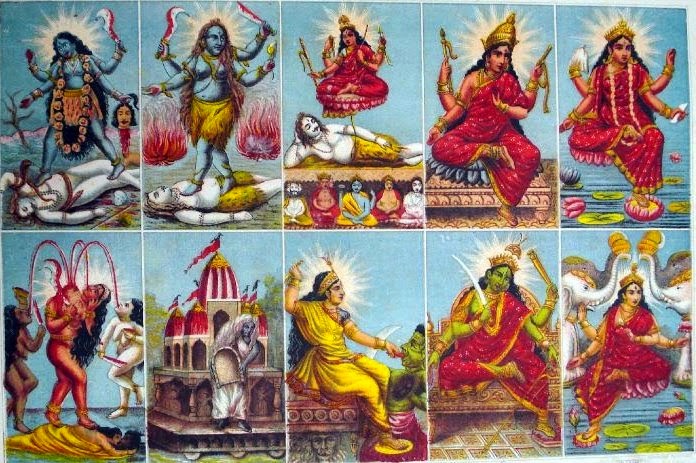 So, would you like to know why Kali stepped on Shiva’s chest?

Story Of Rakta Beej there was once a very powerful demon known as Rakta Beej who had acquired a boon that he could duplicate himself as soon as his drop of blood touched the Earth. Due to this boon, the Gods were unable to bring the notorious demon under control. Hence, Shakti in the form of Goddess Durga was summoned to kill the demon. Armed with all the weapons, the Goddess charged at the demon. But as soon as She wounded him with Her sword and his blood fell on Earth, the demon kept on multiplying. Huge armies of Rakta Beej were formed by the puddles of blood which fell on Earth. Enraged by this, the Devi took the fierce form of Kali. Then She went on to destroy the demon with sword in Her hand. She would slay each demon and drink his blood immediately. Soon She finished the whole army of Rakta Beej and only the real Rakta Beej was left. Then She slay him and drank all his blood till he fell down lifeless. It is said that the Goddess became mad with blood lust after this incident. She started dancing the dance of destruction and forgot that She had already killed the demon.

She kept on slaying the innocent after that. Seeing this, the Gods became extremely worried and approached Lord Shiva for help. Only Shiva had the power to stop Kali at this stage. So, Lord Shiva went and lay down among the corpses where the Goddess was dancing. Accidentally, Kali stepped on Shiva and soon She realised Her mistake. It is then Her tongue immediately came out of embarrassment and She calmed down. She was ashamed that Her blood lust had prevented Her from recognizing Her own husband. Thus, She came back to Her original form and the destruction was stopped. Shiva lying at Kali’s feet also symbolises the supremacy of Nature over man. It clearly shows that without Kali or Shakti even a powerful force like Lord Shiva is inert. Hence, Kali is shown as stepping on Shiva’s chest.